Sixty-eight years ago, in 1947, eleven local lawyers founded St. Mary’s County’s first bar association. At that time, the Patuxent River Naval Air Station was only five years old. The county’s population then hovered around 15,000, the same number of people recorded in the first national census of 1790. The great changes in St. Mary’s County over the next half-century completely transformed the practice of law as those eleven lawyers understood it; as one former lawyer and judge put it, “it’s two separate worlds today, completely different, utterly different.”

The story of St. Mary’s County’s first bar association is recounted in chapter two of the John Hanson Briscoe Historical Project, “In Memoriam: The First Bar Association of St. Mary’s County, 1947.” An introduction to that chapter is included below, and the full chapter may be downloaded for free here. 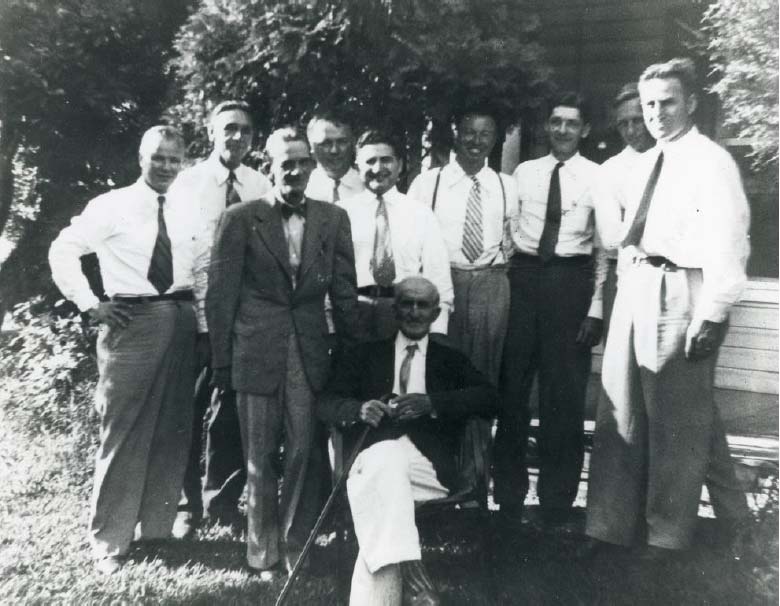 Some lawyers in this association never attended law school; others never attended college. It was not uncommon for the older lawyers of this generation to have obtained their licenses to practice law simply by studying under an established lawyer for a number of years.

Early in this period, few of these lawyers had secretaries in their offices. St. Mary’s County did not even have a resident judge. In fact, the appearance of visiting judges in the county for a few weeks in the spring and a few weeks in the fall was such an event that it was referred to as “Court Week.”

As the population of the county exploded with the development of the Navy Base and the influx of newcomers from outside of the county, the legal system was forced to change with it. The courthouse, which had been used as something like a governmental center, had to gradually remove non-court-related offices so as to accommodate an ever-growing courthouse support staff. Lawyers took on secretaries and acquired technology to assist them with their increasing caseload.

Retired Circuit Court Judge C. Clarke Raley put it this way: “It’s two separate worlds today, completely different, utterly different. From the viewpoint, all of these lawyers from this picture knew very well every single person that was associated with their profession in that community and Leonardtown. And they knew all of their associates. And it would be likely that if you had atrial by jury, they are gonna know every single person who would be on that jury. Not like today, today of total disconnect with that way of doing things. It was just the way it was. Well they had been a part of World War II with less than 10,000 people in St. Mary’s County; most of them were related by blood or by marriage. And the base, of course, changed all that. And we had no computers; some of us didn’t even have type writers.”

As Leonardtown attorney Ernie Bell put it, “Before the advent of Title Companies in St. Mary’s County in the 1970’s,local attorneys performed Title Searches at the Court House when preparing for a Real Estate Settlement. An attorney in those days handling Real Estate matters spent a considerable amount of time in the Deed Record Room at the Court House in Leonardtown. It was there that I became acquainted with John Henry Thomas Briscoe, the father of John Hanson Briscoe. I addressed John H. T. Briscoe as Judge Briscoe. He was about 80 years of age then and still active in the practice of law. He was very helpful to me, always willing to tell a story of what had been. John H. T. Briscoe at the time was the Trial Magistrate for the local Court then handling Misdemeanor Cases. This was the period of time before the District Court came into being on July 1,1971. The Trial Magistrate’s Court was located in the basement of what is now the John Hanson Briscoe Court House. The court room was where the County’s Law Library is now located. I was honored to have been a pall bearer for John H. T. Briscoe.”

Consider the following: of the eleven members of that first bar association, four — Paul Bailey, Joseph Mattingly, John H.T. Briscoe, and Phil Dorsey — served as elected representatives in Annapolis. Six of them — Kingsley Love, Henry Camalier, Philip Dorsey, Joe Mattingly, Joe Weiner, and John H.T. Briscoe — served as the county’s State’s Attorney. Joe Weiner, Phil Dorsey, Bill Sterling, and Joe Mattingly became judges. A fifth, John H.T. Briscoe, served as a magistrate, the precursor of the District Court judges, and a sixth, Paul Bailey, was a Justice of the Peace. Outside the legal profession, both Phil Dorsey and Aloysius King owned local newspapers. The youngest members of the bar, Bill Sterling, Robert Wigginton, and Joe Mattingly, were part of that “greatest generation” and interrupted their legal careers to serve their nation in the armed forces during the Second World War. Before them, Aloysius King and Paul Bailey both served in World War I.

These attorneys were practicing during John Hanson Briscoe’s childhood. They set an example of the attorney as public servant for young John. In less than three decades, as he was reaching the absolute heights of statewide elective office, John Hanson would be vying with two of them to become the Circuit Court judge in St. Mary’s County.
While the focus of this chapter will be on each of these individual members of the bar association, the path will follow a memorial service for Aloysius Fenwick King, who passed before all but Henry Camalier and Kingsley Love.

Ten Tips for Landlords and Tenants How does a car accident claim work? The anatomy of a personal injury claim.
Scroll to top

We may request cookies to be set on your device. We use cookies to let us know when you visit our websites, how you interact with us, to enrich your user experience, and to customize your relationship with our website.

Click on the different category headings to find out more. You can also change some of your preferences. Note that blocking some types of cookies may impact your experience on our websites and the services we are able to offer.

These cookies are strictly necessary to provide you with services available through our website and to use some of its features.

Because these cookies are strictly necessary to deliver the website, refuseing them will have impact how our site functions. You always can block or delete cookies by changing your browser settings and force blocking all cookies on this website. But this will always prompt you to accept/refuse cookies when revisiting our site.

We fully respect if you want to refuse cookies but to avoid asking you again and again kindly allow us to store a cookie for that. You are free to opt out any time or opt in for other cookies to get a better experience. If you refuse cookies we will remove all set cookies in our domain.

We provide you with a list of stored cookies on your computer in our domain so you can check what we stored. Due to security reasons we are not able to show or modify cookies from other domains. You can check these in your browser security settings.

We also use different external services like Google Webfonts, Google Maps, and external Video providers. Since these providers may collect personal data like your IP address we allow you to block them here. Please be aware that this might heavily reduce the functionality and appearance of our site. Changes will take effect once you reload the page.